Welcome to the official website for the Equality Coalition. We are a broad civil society alliance of more than 100 NGOs and trade unions dedicated to promoting equality and compliance with Section 75 within Northern Ireland.

Read more about our work in the About Us section.

LATEST FROM THE EQUALITY COALITION

The Equality Coalition has developed a series of ‘Policy Asks’ for Northern Ireland, which have a particular emphasis on rights and equality. These ‘asks’ are based on a recent mapping exercise examining the status of rights-based commitments from the agreements of the NI peace process.

The Equality Coalition for NI (ECNI) recently consulted on their new (draft) Policy for the Provision of Legal Advice and Assistance. In response, we produced a submission suggesting a number of changes to the draft document. Our recommendations focus primarily on encouraging ECNI to use their enforcement powers strategically and proactively going forwards.

Since the advent of Section 75, the Equality Coalition has engaged extensively with public authorities in relation to their equality schemes. In 2016, when a number of reorganised public authorities were consulting on their schemes, we drafted a generic submission to provide advice to them on best practice. This submission has now been updated for 2021 as a number of public bodies are once again working on updating their schemes.

We have issued a joint statement urging decision makers to address inequality as part of the pandemic recovery after the deaths of at least 2,981 people from Covid-19 in NI. This statement follows on from our previous one on the pandemic, issued in April 2020. Covid-19 has disproportionately affected Section 75 groups such as older people; persons with disabilities and those who are clinically vulnerable; women; black and minority ethnic people; and those with dependents. The members of the Equality Coalition are calling for action to urgently address inequalities exacerbated by Covid-19. Austerity must not become part of NI’s pandemic recovery.

Following the reappointment of the First Minister and deputy First Minister on 17 June 2021, we have realised a statement urging the UK government and Stormont administration to implement the outstanding rights-based commitments arising from the New Decade, New Approach (NDNA) agreement and other components of the peace process.  Some of these commitments remain unimplemented more than two decades after they were first promised.

In March 2021, the Communities Minister Deirdre Hargey published the reports of four Expert Advisory Panels to help inform the development of the new social inclusion strategies for Northern Ireland. We have drafted a short briefing paper summarising each of the four reports and their key recommendations. 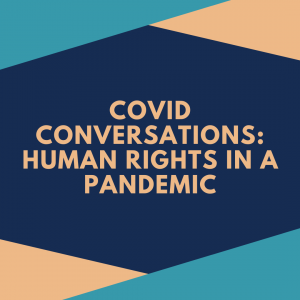 In 2020, the Equality Coalition teamed up with the Transitional Justice Institute and Human Rights Consortium to organise webinars examining human rights issues brought into sharp focus by the Covid-19 pandemic. Originally intended as a limited series, the webinars continued for far longer than we originally expected (much like the pandemic itself).  Events were held regularly from summer 2020 to spring 2021.

They covered a diverse range of topics, including childcare, domestic abuse, digital poverty, the Black Lives Matter (BLM) movement, and access to justice during the pandemic. The webinars have now been made available online for watching at any time via YouTube.

We have finalised our submission on the Programme for Government (PfG) outcomes and draft budget (including departmental screenings/EQIAs). Given their interlinking nature, this submission responds to a number of different, concurrent consultations at once. Our submission examines the rights and equality implications of current plans, including whether the Section 75 statutory equality duty has been applied adequately throughout the budgetary process. We include recommendations for each department in the NI Executive, as well as the Northern Ireland Office (NIO), drawing attention to outstanding issues that still need to be addressed.

In 2019, our Manifesto for a Rights Based Return to Power Sharing called for a new agreement to remove those political vetoes within the NI Executive that are not based on (and have conflicted with) equality and rights duties, and as such contributed to the destabilisation and collapse of the NI Executive in 2017. The issue returned to prominence in November 2020 with the DUP twice using the ‘St Andrews Veto’ to block the extension of public health measures proposed by the Health Minister to contain the pandemic, which were supported by all other parties. In response, the Equality Coalition has produced a briefing note setting out the human rights implications of the veto being used in this way.

A Bill of Rights for Northern Ireland was first promised in the 1998 Good Friday Agreement, but progress towards its development has repeatedly stalled. The establishment of the Ad Hoc Committee on the Bill of Rights at Stormont represents a fresh attempt to move things forward. On 22 October 2020, the Co-Conveners of the Equality Coalition (CAJ and UNISON) gave a briefing to the Ad Hoc Committee in support of the Bill of Rights. You can download the written evidence we provided to Committee members here. Minutes from the session are also available online.

The Covid-19 pandemic has had far reaching impacts on all aspects of NI society, not least education, with most pupils being withdrawn from school for five months due to the strict lockdown period and the subsequent summer break. As staff and students begin the new school term, we must ensure that their return to school is carried out in a way that is safe for everyone, with all decisions subjected to appropriate Section 75 assessment processes to ensure they promote equality of opportunity.

The Equality Coalition’s Education Sub-Group has put together a briefing paper to highlight to decision makers how to ‘equality proof’ the return to school. Download it here.

The 90 members of the Equality Coalition have published a joint statement calling for political action to prevent the Covid-19 crisis from worsening inequalities in Northern Ireland. The statement urges the Northern Ireland Executive and all public authorities to fully discharge their Section 75 obligations to ensure policies developed in response to the pandemic actively promote equality of opportunity and don’t exacerbate inequalities.

Commissioned by the Equality Coalition, independent researcher Dr Robbie McVeigh has authored a piece of research on contemporary sectarianism in Northern Ireland. Across 50 pages, Sectarianism: The Key Facts looks at ‘institutional sectarianism’ in NI – especially where there is evidence of sectarianism in decision-making.

The full report can be downloaded via this link.

A one-day conference was held on 13 October 2017 to explore, from a human rights perspective, when public authorities can or must act against speech and cultural expression in order to protect the rights of others. The event was organised by the Equality Coalition, with support from the Senator George J. Mitchell Institute for Global Peace, Security and Justice. It was comprised of presentations, panel discussions and a series of afternoon workshops, all exploring different themes related to the legal framework (both local and international) on countering incitement to hatred.

From the proceedings of this conference, a comprehensive 90 page report has been published. Download it here.

In March 2019, the Equality Coalition, in partnership with BrexitLawNI, held a major conference on ‘Post-Brexit Citizenship Status: Divided by the Rules?’ in the Moot Court Room at Queen’s University Belfast. Featuring expert practitioner and political panels, the conference explored how Brexit will transform the citizenship landscape in Northern Ireland and could lead to hardened entitlement boundaries between different groups of citizens here.

A 60 page report has been produced from the proceedings of the conference. You can download a digital version of the report here. Hard copies are available upon request by emailing equalitycoalition@caj.org.uk or calling 028 9031 6000.

The Equality Commission for Northern Ireland (ECNI) has been reviewing and revising the procedures related to its enforcement (investigation) powers. These powers enable ECNI to investigate public bodies that fail to comply with their Section 75 duties. In March 2019, ECNI launched a public consultation on its (draft) ‘Revised Policy and Procedures for Complaints and Investigations’. The Equality Coalition responded to this consultation with a detailed written submission, which raises several issues that we strongly urge ECNI to rectify.

More than two years have elapsed since the devolved power sharing institutions provided for under the Good Friday Agreement (GFA) collapsed in Northern Ireland. Additionally, many of the rights based commitments of the peace settlement, including those originally designed as to act as safeguards on the NI Executive and Assembly, remain unimplemented or have been misimplemented. Fresh cross-party talks to restore power sharing have been announced for May 2019. However, there is little point in restoring the institutions only for them to fail to deliver and collapse again for the same reasons. Conscious of this, the Equality Coalition has developed a ‘Manifesto for a Rights Based Return to Power Sharing’.

Follow this link to download the manifesto. An Irish language version has also been published, with help from Conradh na Gaeilge. A larger font version in either language is available upon request – email equalitycoalition@caj.org.uk or call 028 9031 6000.

Independent researcher Dr Robbie McVeigh was commissioned by the Equality Coalition to explore incitement to hatred in the Northern Ireland context. There is copious evidence of hatred in NI – particularly racism, sectarianism and homophobia – which sometimes manifests itself in instances of ‘hate crime’. Moreover, there is ample evidence of incitement to hatred as it is characterised in international human rights standards. Dr McVeigh’s report examines the scale of the current problem, as well as how effectively it is being dealt with by public authorities and the justice system.